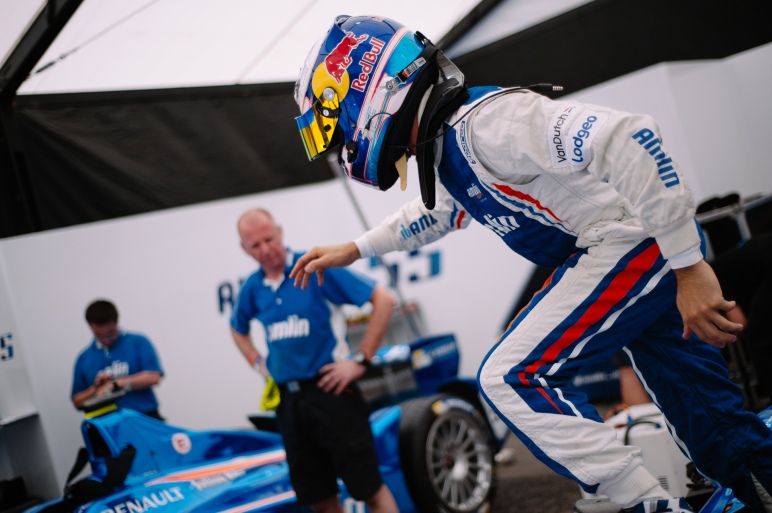 Augmented reality has the potential to revolutionise sport, sustainability and transport in megacities. Formula racing is a vibrant, colourful, fast paced sport. Now, something new is set to offer its innovative, immersive motoring experiences to viewers beyond the trackside.

The Oculus Rift is a new virtual reality headset that allows players to step into a game. Or a race. It produces a stereoscopic 3D experience with a huge field of view. The point of this is simple; you don’t see the screen. The technology overcomes resolution and latency problems that have plagued previous virtual reality (VR) headsets, where movement in the game lags behind movement of the head.

“All of us at Oculus Virtual Reality are excited to bring truly immersive VR to people who love video games like we do,” said Palmer Luckey, Founder of Oculus. “Virtual reality has been the long sought after Holy Grail, which most people only ever dreamed of until now. The Oculus Rift is a true game changer that will help make VR the standard for game play in the very near future.”

But I believe that Oculus has potential to deliver more than just immersive gaming and along this avenue my ideas can be how we deal with the lack of engine noise prevalent in current Formula E cars. The phenomenon is something that new F1 engines are struggling with too. VR offers a solution; one that has far reaching implications.

One of the great things with how the season has gone so far is that we have plenty of racing spectacle. Obviously the noise of F1 cars does blow your mind, particularly when you see the race in person, but if you have to rely on the noise to deliver the experience then that’s a problem.

I believe that Formula E can solve this by integrating other experience mechanisms like real time gaming, or VR. Imagine if you could sense enough data from the car and transfer this at the highest rate you can to someone at home and then use that data to truly immerse them in the race. I think that’s the future because ultimately we all want to be more engaged.

I reckon that this is something that can be driven by transferring the experience from the car to the viewer as vividly as possible. If you could feel that experience of driving a Formula E car, possibly through new devices like the Oculus Rift product and the on-car data analysis systems being used in autonomous vehicles, then I think that would really redefine how we experience the sport and make things like sound irrelevant.

And don’t think that car manufacturers are far behind, this is what Jaguar are currently proposing:

Autonomous cars offer tremendous scope for achieving this. They harvest far more data than existing vehicles, and feeding that into the latest VR devices will offer a more absorbing, interactive experience.

My vision hints how Formula E fans across the world could be plugged in to every nuance and twist of a track. Such an experience would have long lasting repercussions in the world of sport, advertising and VR, but could also impact on sustainability now and into the future.

I ran R&D and test teams throughout my F1 career. We were already trying to do data mining back in 1998, but of course the PCs couldn’t handle a lot of the data at that time because they lacked the processing power.

As computing power got bigger we really saw an increase in the level of sensors on the cars. Autonomous vehicles are now sensing an order of magnitude more data in order to feed the artificial intelligence systems that allow them to drive unaided.

Such fast changing technology, where open data and the internet change our world, could solve environmental challenges and offer nifty ways to virtually race. I went off to Silicon Valley five years ago to find out how they were approaching automotive. They were approaching it in a completely different way, with focuses on car-sharing, open-data source journey planners for public and so forth.

My thinking was that if Silicon Valley were going about solving these problems in a particular way, then maybe we were going about it the wrong way. When we started looking at setting up a Formula E team we saw it was relevant for driving innovation of electric powertrains, with applications in electric buses, trains and the traditional road car.

Technology from sport drifts into the mainstream, whether through data led VR or electric road cars. I believe such ideas can lead to true integrated transportation in the megacities of the world. If you put all this together you get a picture of how to solve the whole system.

Transplanting ideas from race track to sustainable city has precedent. When I did my MBA, I learned the effect of ripples through many seemingly disparate markets. There is always cross-pollination of ideas, so long as you’re able to be open minded about similarities.

Tomorrow’s world is full of possibilities. Global users might share in a Formula E race via VR, before virtually learning how cars can modify our urban sustainability impacts. Then, they might drive electric vehicles to purchase game consoles, which transmit household energy data back to the web.

Such linked up science need not be an impossible imagining. Indeed, it is limited only by how widely we conceive the future.